An effective pre-application stage including discussions with Officers and a coordinated community consultation exercise generated significant local support, enabling Planning Potential to secure approval for a new Aldi store on a site allocated for a new district centre. 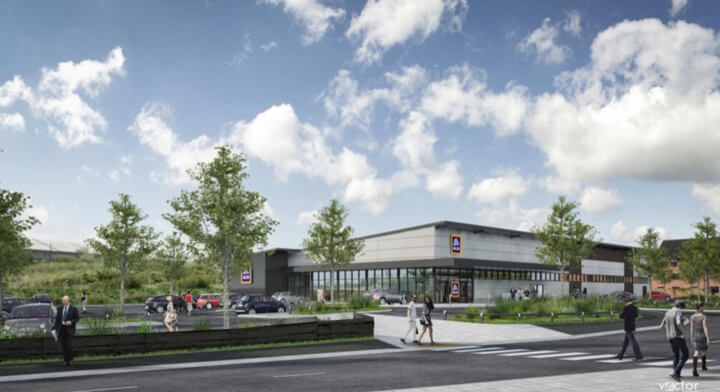 Planning Potential originally secured permission in 2015 for a new Aldi store on the site following the unanimous support of Committee.  We also secured a delegated approval for an enlarged store and car park in early 2015, ensuring the regeneration of a vacant brownfield site and the delivery of a 1,717 sqm food store and 121 space car-park.

Planning Potential were successful in demonstrating that Aldi could deliver short-term positive regeneration on a site which had lain vacant and been allocated for many years. A coordinated public consultation was key to securing local stakeholder and resident support, as were our discussions with Officers which resulted in a positive recommendation to Committee on what was a locally prominent site.

Unanimous approval was secured at Committee for the original application, and Planning Potential were also successful in negotiating an acceptable S.106 agreement for our client.

The relationships built during the original application, were also beneficial when submitting a revised application for an enlarged food store. A swift delegated approval was secured to allow Aldi to meet their programme and progress a scheme based on their latest format.