Acting on behalf of Quora, we secured planning permission to redevelop and extend a former bingo hall in Sheffield to create a discount shopping destination. Occupiers include ALDI, Home Bargains, Iceland and a value gym operator. 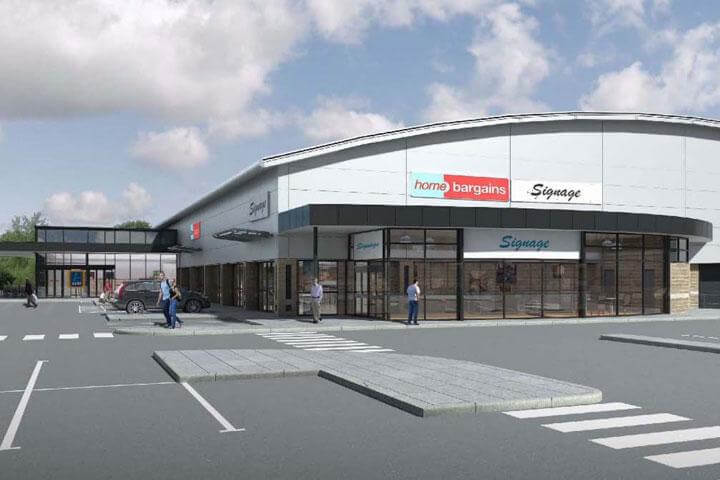 Acting on behalf of Quora, we secured planning permission to redevelop and extend a former bingo hall in Sheffield to create a discount shopping destination. Occupiers include ALDI, Home Bargains, Iceland and a value gym operator.

The proposals to regenerate the site of the former bingo hall involved the extension and complete refurbishment of the premises, together with improvements to the car park, landscaped areas and links with the surrounding area.

The site was allocated for mixed commercial use, with some retail development – of up to 500 square metres – considered acceptable. Our proposals to create a retail park would bring a vacant building back into use, encourage inward investment, improve the visual appearance of a disused site, create local jobs, and provide discount shopping opportunities for local residents.

We not only promoted the many benefits of the scheme, but also considered a wide range of issues relating to store operation and likely impact on neighbouring residents – addressing delivery times and HGV movements from a safety perspective.

A number of pre-application discussions were held with Sheffield Council’s planning officers and it was established, through the sequential approach, that there were no sites in nearby centres that could accommodate the proposals. The location of the site, in a deprived area comprising dense housing with local shops and services, made it suitable for discount retail centre use. Improved links between the proposed development and existing local shops were seen as one of the many benefits of the scheme.

As well as liaising with planning officers at Sheffield Council, we also engaged with ward councillors, local residents and businesses. A newsletter that outlined the proposals and sought feedback was sent to 700 homes and local businesses. The proposals received a positive response, with 96 per cent of residents who responded to the newsletter choosing to support the scheme. Due to this wide support and lack of objections, the scheme was delegated for approval by council officers. Planning consent was issued within just eight weeks.

The redevelopment of the site, which was completed in December 2013, was seen by local shoppers as a major improvement to the area. Occupiers include ALDI, Home Bargains and Iceland. The ALDI store alone created 35 jobs – bringing 30 new people into the business, of whom 16 were previously unemployed. A third of the staff employed at the store live within walking distance, demonstrating ALDI’s commitment to local employment.

We carried out a number of customer surveys in September 2014 to check the health, in terms of trading performance, and ongoing impact of the retail park. We discovered that the ALDI store has diverted trade largely from neighbouring ALDI stores and another out of centre supermarket, rather than having a negative impact on the centre of Hillsborough. Discount shops operating in the park are trading well and are serving the intended local catchment area.