When Bosideng identified a striking new building on South Molton Street as the perfect location for their new European headquarters and flagship store, they appointed Planning Potential to secure the permission they would need to enable them to adapt the premises to suit their ambitious expansion plans. 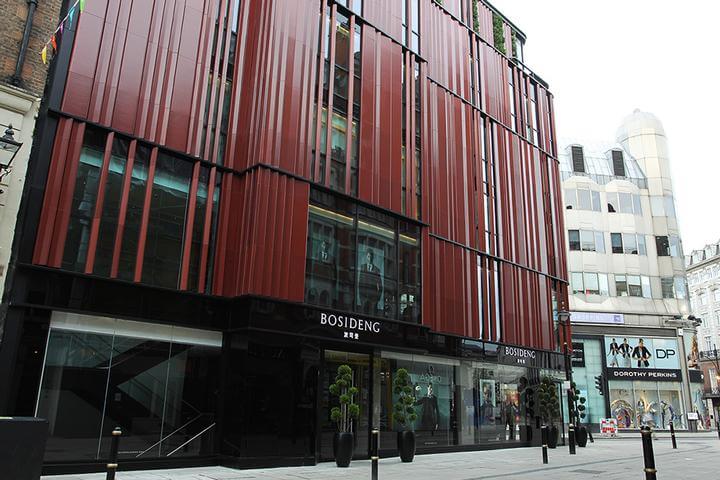 When Bosideng identified a striking new building on South Molton Street as the perfect location for their new European headquarters and flagship store, they appointed Planning Potential to secure the permission they would need to enable them to adapt the premises to suit their ambitious expansion plans.

Permission was granted in 2009 for the redevelopment of the former “Hog in the Pound” pub to create an architecturally striking, six-storey, mixed-use scheme. Occupying a prominent site, at the junction of South Molton Street and Davies Street, in the heart of the West End, this landmark scheme caught the attention of Bosideng – China’s leading down wear retailer.

The mixed-use scheme was designed speculatively, before occupiers had been identified, to comprise a retail unit occupying basement, ground and first floors, with a further four floors of office and residential accommodation divided equally above. Embarking on an ambitious programme of expansion in Europe, Bosideng sought to reconfigure the interior of the building to suit their needs – extending the retail space to second floor level to create a flagship store, with two floors of office space above that. The retail store was designed to showcase Bosideng’s collection of clothing and
accessories and the head office space would provide meeting and office accommodation for designers, buyers and company executives.

The additional retail floor space was welcomed by officers at Westminster Council, but they expressed concern about the loss of residential accommodation. Although Bosideng’s proposals represented an increase in both residential and commercial space, compared with the former use of the site, council policy encouraged the space to be divided equally between residential and commercial uses. Restricted by the small footprint of the development, Bosideng didn’t consider it practical to provide two floors of residential accommodation within their flagship building, although they were happy to retain a self-contained flat at fifth floor level.

We were able to present a compelling case to both officers and members, successfully convincing them that the economic benefits of encouraging inward investment should outweigh the Council’s policy of retaining residential accommodation.

It was particularly important for Bosideng to open their new flagship store in time to take advantage of the focus on London during the 2012 Olympics. Permission was granted and Bosideng were able to occupy the premises in the summer of 2012.