Acting on behalf of ASDA, we prepared and submitted planning proposals, won considerable local support and secured approval for a complex retail-led redevelopment scheme in Ware. 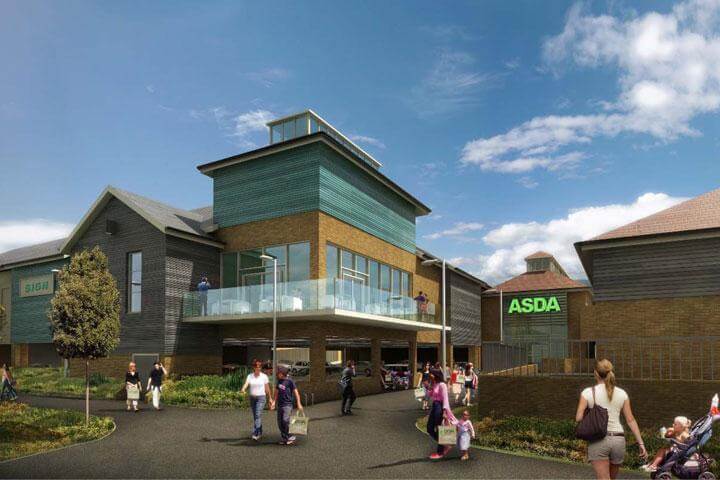 Acting on behalf of ASDA, we prepared and submitted planning proposals, won considerable local support and secured approval for a complex retail-led redevelopment scheme in Ware. The scheme, which regenerated a former industrial site and included the refurbishment of historic buildings, delivered a new ASDA food store, a nursery, 14 residential units and linkage enhancements to Ware Town Centre.

The history and former use of the site raised a number of issues — including the need to preserve historic assets and establish the principle of retail development. Scheme design and highways matters needed to be considered carefully, whilst the close proximity of houses along three boundaries meant that residential amenity was also a key local concern.

In order to support the retail proposals, we undertook background analysis, which showed Ware was losing around 70 per cent of trade to surrounding towns, demonstrating a clear lack of choice in the area. This was reflected in surveys of local people, who wanted more competition for Tesco, the town’s only supermarket.

The complex nature of the scheme meant it was crucial to address all the issues that were raised and highlight the key benefits of the scheme, which included enhanced choice for shoppers, regeneration and job creation. Through a carefully coordinated planning and communications programme, we successfully generated wider support for the proposals.

A planning performance agreement was arranged with officers, to ensure there was a clear timeframe in place to progress the application. Our proposals were scrutinised by ASDA’s competitors and we provided robust rebuttal evidence in response to objections.

Our efforts to win support for the proposals and address concerns swiftly were rewarded at the planning committee, where a clear majority of council members voted in favour of the scheme, citing regeneration and investment as key benefits.

Having secured approval for the scheme, we were instructed to discharge numerous planning conditions in advance of the store opening. Knowing that the build process followed an extremely challenging programme, we secured a more flexible set of trigger dates for the conditions, to relieve the pressure and assist the construction team.