We worked closely with the local community, Southwark Council and other members of the project team to devise redevelopment proposals that would make best use of a large industrial site in Central London. 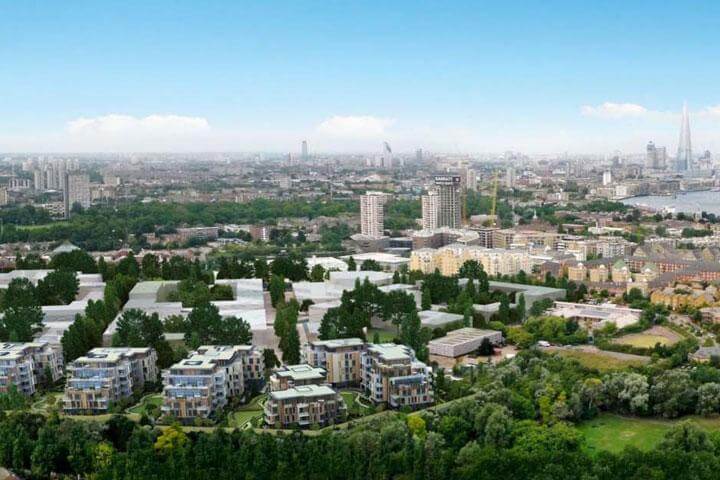 We worked closely with the local community, Southwark Council and other members of the project team to devise redevelopment proposals that would make best use of a large industrial site in Central London. Proposals to redevelop three warehouses and create 366 residential units, a convenience store, gym, nursery and café were unanimously approved by Southwark Council.

The Quebec Way Industrial Estate site was allocated for redevelopment in Southwark Council’s Area Action Plan to regenerate land around Canada Water. The project team felt that the site was suitable for a higher density redevelopment than that indicated by the plan – to make better use of the land and deliver a larger number of much needed homes. Acting on behalf of Woodland Views Ltd, we successfully secured changes to the Area Action Plan to enable the development of up to 700 habitable rooms per hectare – doubling the original 350 rooms per hectare suggested in the plan.

The team engaged with members of the community at a very early stage in the planning process and the views of local people were considered throughout the preparation of redevelopment proposals.

Liaising particularly closely with the Friends of Russia Dock Woodland, we devised a scheme that reflected local aspirations to incorporate green areas in the urban space and provide improved access routes through the site to the adjacent woods.

As a result of the extensive public consultation programme, the redevelopment proposals received considerable backing and attracted just nine letters of objection. Friends of the Earth were amongst those who chose to support the proposals.

Planning permission was granted in 2012, on the recommendation of Southwark Council’s officers, with unanimous approval from members.