A contaminated derelict factory site has been transformed into a new neighbourhood incorporating a park and links through to the wider town centre and railway station. 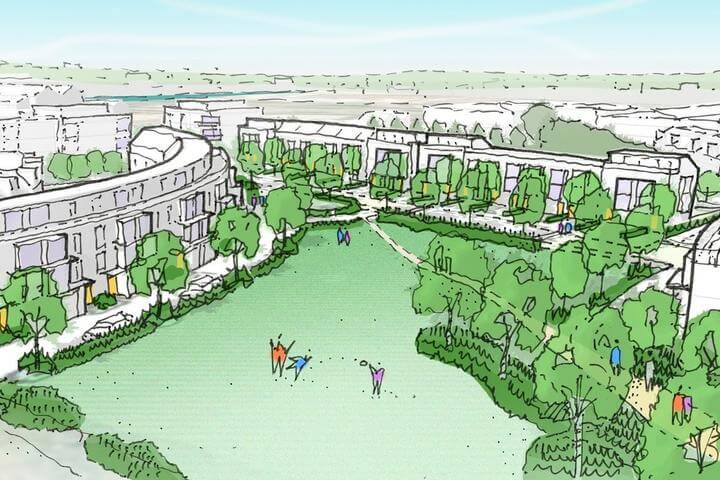 The former factory site at Railway Road, Newhaven, was used by Parker Pen for manufacturing of fountain pens from 1941 to 2010. Despite active marketing since 2009, a new employment use could not be identified and the site remained vacant until 2013, when proposals for its redevelopment for residential development were promoted.

The site is within easy walking distance of the town centre and well connected with Newhaven Town Station, and the surrounding area has a mixture of housing, open space and commercial land. Throughout the development process a series of meetings and consultation events took place. Following each event the feedback received has helped to further develop the scheme.

145 dwellings were proposed, with a mix of 1 and 2 bed flats, and 2, 3 and 4 bed houses. The proposals were for a scheme with a broad range of housing types to reflect the surrounding area. The development was designed so individual buildings relate to the surroundings whilst creating a distinct and separate identity.  The design responds to the adjacent housing and creates a contemporary yet sensitive interpretation that acts as a transition between the residential development to the south, and the commercial and maritime context to the north and west. The scheme was designed to extend the recreation ground and provide links through to the surrounding area.

We followed an open book approach to the site development costs and all the information has been reviewed by the Valuation Office and their surveyors. As the de-contamination costs were so great the build costs were much higher than for standard housing sites. The Council Officers and the Valuation Office confirmed that 10% affordable housing was the maximum level that could be achieved for this site. This related to the exceptional costs for developing this site, given the historic uses.