We were able to maximise the development proposals by successfully arguing that the application site should be considered as an integral part of the wider estate regeneration, rather than the lesser scale of the existing context. 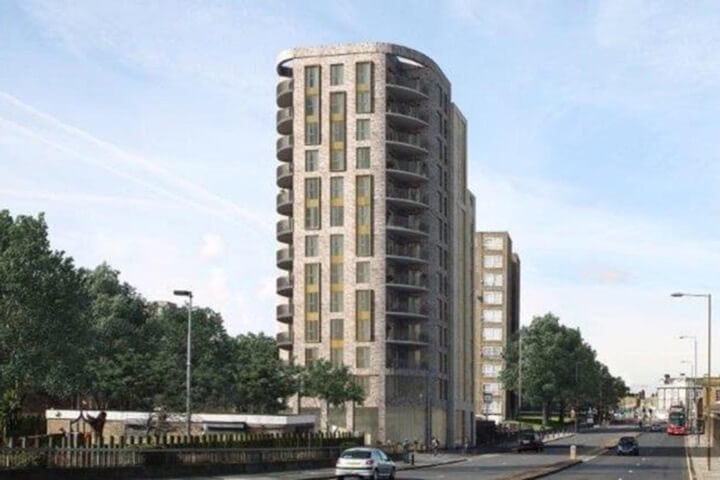 The proposals to regenerate the site of a former public house involved the demolition of the existing building, and the construction of a new purpose-built unit of significantly higher quality build and design. The scheme proposed the replacement of an existing single-storey building with a 13-storey tower, drawing reference from the adjoining estate renewal.

We were able to maximise the development proposals by successfully arguing that the application site should be considered as an integral part of the wider estate regeneration, rather than the lesser scale of the existing context. This enabled the delivery of a scheme density that significantly exceeded the levels expected by the London Plan Density Matrix.

Pre-application discussions were held with Greenwich Council’s planning officers, as well as the GLA and TfL, where it was established that a high density scheme would be acceptable in principle. A key challenge was to convince local officers and members that bringing this site forward, ahead of the wider estate regeneration, would in no way prejudice the broader scheme.

Through the development of a positive relationship with the Council’s regeneration team in particular, we were able to discuss the proposals with the developers of the wider estate, who confirmed their support for our scheme.

We also engaged with ward councillors, local residents and businesses. A newsletter that outlined the proposals and sought feedback was sent to nearly 500 homes and local businesses. This successful engagement with the community enabled the proposals to receive unanimous approval from the Greenwich Planning Board, who commended the scheme’s “excellent” design.

By demonstrating awareness of the surrounding environment and presenting clear public benefits, we were able to secure Council support for the proposals – at relatively little cost to the applicant. These included S106 contributions to the improved appearance and security of a nearby pedestrian route, and an adjacent children’s play area. This allowed the scheme to offset its on-site amenity space provision, and attracted relatively few other S106 payments.