We secured permission for a retail scheme on a gateway site in Crayford Town Centre. The site had been subject to numerous proposals over the previous 15 years – none of which had been successful due to the complex nature of the site’s constraints. The scheme we promoted provided a deliverable solution – generating investment, creating new jobs and enabling the regeneration of a long-vacant town centre site. 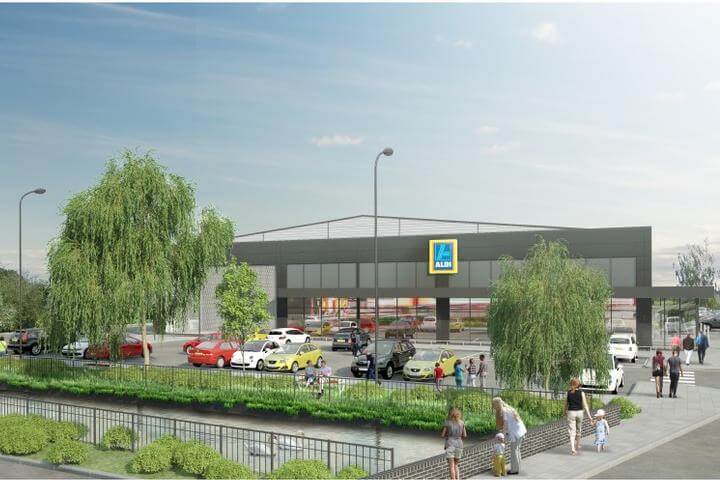 Planning permission had previously been granted for a much larger development on the site, but this unfortunately failed to materialise due to concerns about potential flooding. The flooding issue proved very complex – at one point looking insurmountable – and the town centre site was almost left permanently vacant.

In collaboration with ALDI’s professional team, we worked closely with the Environment Agency to reach an agreement to overcome the flooding issues – finally unlocking the investment potential of this challenging site. The regeneration scheme proposed a high quality contemporary building on the “island” site and involved comprehensive improvements to the River Cray, including river bed clearance works and the creation of a new walkway.

We were successful in promoting the proposals to council officers, local stakeholders and residents through an extensive consultation exercise. More than 90 per cent of the local people we engaged with expressed support for the proposals and the plans were also welcomes by ward councillors.

We worked with council officers intensively, throughout the application process, to ensure a viable development could be delivered. The proposals were unanimously supported by council members at committee in November 2015 and the development was completed in October 2016.